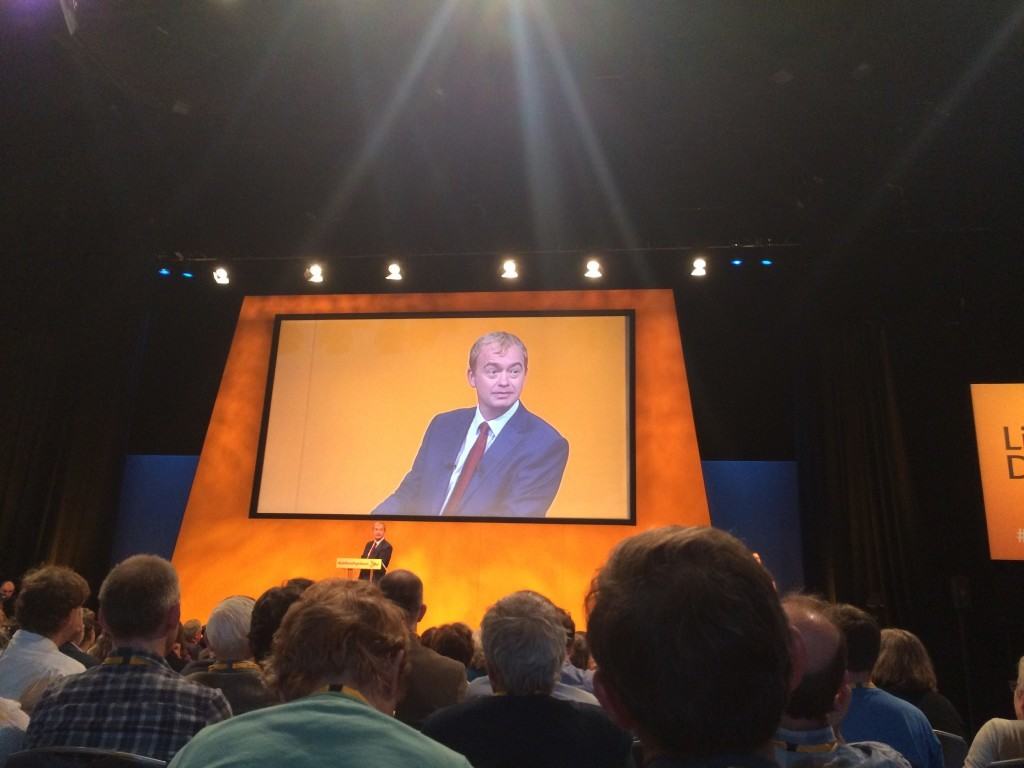 I’m just back from Bournemouth where Britain’s Liberal Democrats have been having their Autumn Conference. This was the first conference after this year’s General Election completed five successive years of rout for the party, and the first under its new leader, Tim Farron. It went as well as the party could have hoped for.

The depth of the party’s defeat in May can barely be described, as it was reduced from 57 seats to just 8. This was most spectacular in the south west of England, which had been the party’s main stronghold, but where the party lost every single seat. The public were fed up with it, which had formed a coalition government with the Conservatives. Both the Conservatives and Labour were more interested in crushing the Lib Dems that in damaging each other, and neither could the party resist the SNP surge in Scotland. Meanwhile, on the ground, in most places, the party had exhausted itself, and could no longer mount the sort of strong grass-roots campaigns that had seen its rise to 63 seats in 2005. What had been a steady decline after this high point turned into a rout after the 2010 election, and the party’s period in coalition. Its base in local councils bled nearly to death; it fared very badly in Scottish Parliament elections in 2011, and a catastrophic near wipeout in the European Parliamentary elections in 2014, before this year’s humiliation. The party has not just suffered a temporary blip; it has been hollowed out.

But something rather strange has happened more recently. After the election the party experienced a surge in its membership – adding 20,000 in four months. My local party went from about 120 in January to nearly 320 now. Some of these new members are returnees, who dropped out in the coalition. But most are drawn from voters, especially younger professionals, drawn to what they understood of the party’s values over the coalition years. These new members signed up in record numbers to attend the conference in Bournemouth, making it one of the most successful ever in terms of membership attendance – though others, from media to advocacy organisations, shunned the party after its loss of influence.

The main task at Bournemouth was to integrate this new blood with the old-timers, and to forge a renewed political movement. These disparate elements need to be inspired with a sense of common purpose and values. This is an inwardly focused business – the party has to sort itself out before it can seriously chase floating voters and win elections. And, my impression was, this went pretty well. The formal business was somewhat insipid, with very little controversial put up for debate. But this no doubt helped forge common purpose. And, of course, there was the training, the fringes and the socialising. The new member I spoke to on my journey home said the experience was inspiring, and much better than she had expected; and that seemed to be the view of others she had talked to.

The new leader played an important part in this. The leader has three big public performances: the rally speech on the first night, a question and answer session, and the closing speech. I saw the first and last of these. The rally speech was a nicely judged affair, where Tim (as I will call him – I will make no pretence of objective distance) showed his flair for public speaking. The effect was rather spoiled for me by an email follow-up that arrived to one of my mail boxes (one where the party’s database didn’t know I was already a member), attacking Labour, accusing them of not being a serious opposition to the Conservatives. This is more of the bubble-talk of which we have had far to much already. Labour are fired up by their hatred of the Conservatives. There are good reasons to think their opposition will fail, but  that failure has not happened yet. The Lib Dems can push Labour to take a stand on liberal issues, claiming to replace it is premature.

But the closing speech was a barnstormer – and the best leader’s speech I have heard for a very long time. It started a little slowly, and I thought it was going to disappoint at first – but that was just pacing. Three things stood out for me. The first was, as Roosevelt said in despair at emulating Churchill’s public speaking: “He rolls his own.” No doubt he was helped by speechwriters, but it sounded authentically his voice, with his characteristic humour and turn of phrase. This helps him sound authentic. The second thing was that the speech was rooted in the concrete. Leftist politicians have a habit of talking about abstract ideas (austerity, neoliberalism, progress, and so on). Tim avoided this; to make his point he concentrated on three issues: housing, refugees and Europe, and rooted these in real experiences, asking his audience to imagine the world from a different perspective. There was thankfully no talk of the abstract “centre ground”, so loved by his predecessor, Nick Clegg. And the third thing about Tim’s speech was its plain rhetorical firepower. He has a full range of gears from light and humorous up to full-blown, earnest passion. That full range was on display.

With the possible exception of Nigel Farage, the Ukip leader (whom I haven’t heard properly), this might make Tim the best public speaker of all the British party leaders. The contrast with Labour’s Jeremy Corbyn is quite striking. Mr Corbyn oozes authenticity, but he hasn’t got the rhetorical range.

So far, then, so good. The party has to do more inward work before it can really start challenging the other parties, though. That is conspicuous on policy. Tim tried attacking Labour for its irresponsible economics. This is pretty weak, until the party can develop its own distinctive economic narrative, that isn’t just a middle line between Labour and Tory. And the party got a glimpse of how hard this policy thing can be with the only controversial policy debate of the conference: on replacing the Trident nuclear weapons system.

On the one hand was offered a values-based line of getting rid of nuclear weapons altogether. On the other, more mainstream politicians, including the leaders of the Scottish and Welsh parties, wanted something a bit more fudged that would interfere less with fishing for floating voters. And the conference voted narrowly for this less inspiring course.

This blogger will try to make a modest contribution to this policy development, and in particular by suggesting ways forward on economic policy,  public service reform and political reform. More on that another time.

But meanwhile, I am encouraged that the party is gathering strength. I do not expect a major political impact on the wider scene for another year at least, though. The Conservatives, Labour and the SNP all have momentum right now, and it will be near impossible for the Liberal Democrats to break in with a distinctive voice. But the moment will come, and I hope the party will be ready when it does.

3 thoughts on “The Lib Dems start the long journey back”