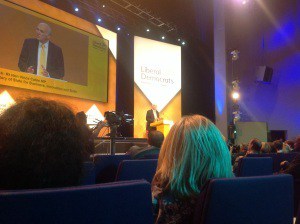 Day three of the Lib Dem conference in Glasgow and this 50-something attendee is getting a bit tired. The mood continues to be good, but the controversies are rather minor. I will offer a few highlights.

There were two important set-pieces. Vince Cable’s speech and the leader’s Q & A. Mr Cable’s contribution was more assured than Danny Alexander’s yesterday. It was largely a defence of the party’s record in government. In policy terms he stuck to the same line as Mr Alexander. A strict policy on the deficit to be softened significantly for investment in infrastructure, including housing. He claimed that the Tories were dead against this. This is welcome, and backed up by a recent research paper from the IMF. He readily got his standing ovation.

In the Q & A Mr Clegg showed off his grasp of detail. He criticised the Conservative and Labour parties for being uninterested in political reform beyond short term tactics. He may right. The question is whether they can be manoeuvred into something more fundamental by their promises to Scotland. I am not optimistic except that after the next election both parties may fall apart, opening up British politics.

Policy did not get my full attention. There was a motion on building more houses, which was worthy enough. At a fringe group Generation Rent and Crisis, housing pressure groups, urged us to present a more coherent strategy on housing and the rented sector in particular. They are right.

In the evening I attended a fringe on teaching science and maths, sponsored by the Royal Society. I spoke up to support the key role of primary schools. Interestingly a business lobbyist said that employers needed skills rather than knowledge. This is the opposite to what seems fashionable in Westminster, where they attack “soft” skills-based teaching in favour “hard” facts. Well maybe some teaching of skills is a bit soft, but this is ultimately what education is for. I was always taught that education was to teach you to think, not recite facts.

On Sunday evening, at a fringe on Liberal thinkers, veteran Scottish MP Malcolm Bruce said that he joined the party at one of its low points. It was the only way in which he could promote his liberal values. He was being urged that he had to take sides between the Tories and Labour- but he rejected this notion. Something like this idea drives the party now. It is deeply unfashionable. Many cannot forgive it for dealing with the devil in the current coalition. But these are the same old people who feel that there are only two important movements in politics and that ultimately you choose. But both the socialists and the conservatives are fundamentally wrong, and any deal with either is a matter of temporary pragmatism.