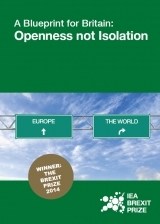 One thought on “Brexit: an own goal for the Eurosceptics”