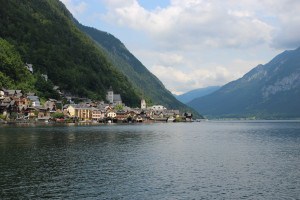 I have been on holiday to St Wolfgang in Austria in the last two weeks, which explains why I have not posted anything recently (NB the picture is of nearby Hallstatt, not St Wolfgang). This holiday was mainly about fresh air and relaxation. Political reflection was not on the agenda – but I just can’t help myself. Austria is a very interesting political case study.

The country is an overlooked success story. The area that we visited, the Salzkammergut, was pristine. Everything was neat and tidy. The state of public infrastructure, from roads to public footpaths, was excellent as well as highly extensive (hot water is supplied communally, for example – not to mention all those well marked and maintained foot and cycle paths)). This was a major tourist region, but no Cornwall, with tourist affluence co-existing alongside poverty. There was plenty of local industry, and quality medium-level jobs, tucked away on the edges of the villages.

Economic statistics bear this success story out. Income per head in 2013 was 11th highest in the world, according to the IMF – behind the USA, but comfortably ahead of Britain. Unemployment is low (4.7%), the trade balance is positive (2.9% of GDP), and there is a reasonable level of growth (1.4%). The government is in deficit, but the level of 2.8% of GDP looks much better than  Britain (4.6%). This is in spite of a high tax take (43% in 2012 according to the Heritage Foundation, compared to 39% in Britain and 27% in the USA). According to the OECD the Gini coefficient, measuring income inequality, was 0.261 after taxes and transfers, one of the lowest (i.e. most equal) in that group (Britain is 0.345, the US 0.378). The really interesting thing about this statistic is that this level of equality has been attained through redistribution. Before tax and transfers Austria’s Gini is 0.472, similar to that of the USA (0.486) and Britain (0.456). Austria taxes the wealthy highly and has a generous level of social security. It is a beacon of social democracy.

This is interesting because we are constantly told by economic liberals that high taxes and high social security is the path to doom and poverty. And, to challenge another piece of received economic wisdom, it does not even have its own currency, being part of the Euro zone. In America, you only have to mention “Europe” to a Republican, and it conjures up an image of economic failure. And yet Austria is no economic failure. It is not like France or Italy, whose economies are struggling. Why is Austria so successful? Well, I don’t know the country that well – but let me make three observations.

The first is that power is highly decentralised. Austria itself is not a large country, with 8.5 million people. It nevertheless has a Federal constitution, with nine states. These are highly visible on the ground (we were staying within a few hundred metres of the boundary between Upper Austria and Salzburg; we also visited Styria), on car number plates, and so forth. Local municipalities levy a payroll tax (about 3%) and as well as property taxes. In Britain, at least, there is a tendency to think that social democracy implies highly centralised governance, as shown by the last Labour governments highly prescriptive diktats on local government.

The second observation is that civic society is clearly very strong. You don’t achieve Austrian levels of order by government diktat and regulations alone. This requires active civic engagement – a bit like David Cameron’s “Big Society”. But what Mr Cameron failed to grasp is that big government (if highly localised) and high civic engagement work well together. Indeed, Austria’s political system looks like a bit of a stitch-up (two dull establishment parties, challenged by right-wing mavericks) – I am sure that it is high civic engagement that holds government services and public infrastructure to account, rather than the electoral process by itself. Again, Britain’s social democrats tend to view civic society as interfering busybodies with a NIMBYist agenda.

So far, this picture reinforces Liberal Democrats conventional wisdom: strong local government, linked to a high level of community engagement. The catch is my third observation: Austrian political culture is not liberal. In fact we would regard it as distinctly nasty. Ukip supporters would feel comfortable here (if you exclude the small government types). Unlike Germany, there is no public angst about Austria’s Nazi episode – though the country was highly complicit (Hitler was an Austrian after all). Immigrants face hostility. Austrians are very hospitable to visitors (more so, in my direct experience, than the Swiss, for example); but visitors go home and do not challenge for jobs and political influence. We did not see much sign of foreign staff in the restaurants and hotels – you meet more Poles in Cornwall. The EU is regarded with suspicion, if not hostility – even if it is accepted as an inevitability. Social attitudes tend to be conservative. In the hotels, the men tended to have the more authoritative jobs, with women running around as skivvies – though the shops tended to be run by highly capable women.

Perhaps the biggest question for British liberals is this. A fairer distribution of wealth and jobs seems to flow from strong local government, based on strong local communities; but is this compatible with more fluid liberal, human-rights based values? Or must strong liberal social values lead to economic liberalism, and the unequal, hollowed out society that seems to be taking root in the US, for example. Can you be both social democratic and liberal at the same time? To that critical question Austria does not provide an answer.