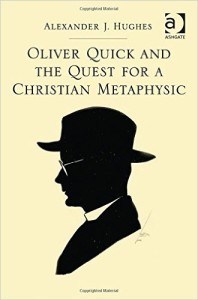 on aspects of religious faith sometimes, from my agnostic Christian standpoint. I have not attempted this recently as it rather distracts from my main mission of tracking the evolution of liberal politics. But it’s Christmas time, and I have recently finished reading this book about the work of the early 20th Century Anglican theologian Oliver Quick (1885-1944). He is my grandfather. Those only interested in my political musings should read no further.

Oliver Chase Quick, to give him his full name, was the son of a priest, Hebert Quick, who made a name for himself in the development of liberal education, but who died in 1891, when Oliver was but 6. His mother, Bertha, daughter of Indian Army officer Chase Parr, lived until 1934. She became an important family figure, holding together the extended family of Quicks, Parrs and Hills (the Shropshire family into which Oliver’s sister, Theodora, married), developing a family bond which has continued until my generation. Oliver went to Harrow school and then Corpus Christi Oxford, where he surprised everybody by only obtaining a third. That put an end to prospects of an immediate academic career, and he was ordained into the Church. He became curate at St Martin’s-in-the-Fields in 1914, “then a very dead and empty church,” according to my grandmother; the new vicar, who invited Quick in, was the charismatic Dick Sheppard, who started the church’s now famous outreach to the poor. In 1915 Quick became Chaplain to the Archbishop of Canterbury, based mainly at Lambeth Palace. There he met Freda Pearson, secretary to the Archbishop’s wife. They were married at St Martin’s-in-the-Fields in 1917, with the Archbishop, Randall Davidson, presiding. Quick became Canon at Newcastle in 1920, followed by Carlisle (where my mother, Julian, was born), St Paul’s, Durham and finally Christ Church Oxford, where he became Regius Professor of Divinity. He died in 1944 of a progressive heart disease – a condition that would almost certainly be readily treatable these days.

Notwithstanding the setback at the start of his academic career, Quick became probably the foremost Anglican theologian of his day. But his work is now largely forgotten. Understanding why this is the case is a central theme of the book, Oliver Quick and the Quest for a Christian Metaphysic, by Alexander Hughes, Archdeacon of Cambridge. This book is directed at an academic audience, and I do not recommend it to a general readership. Sample chapter head: Theological Prolegomena to Christology. I struggled through it from grandfilial loyalty, but I would not like to suggest that I managed to digest it properly. Still, I found it of enormous interest, and it made more sense as I progressed through it. Quick was a man of his times; his work is now of marginal interest because times have changed.

Those times, of course, where the aftershock of the scientific revolution of the 19th Century, of which Charles Darwin’s theory of evolution was only the most spectacular part. The world had previously been understood to be a divine act of will with Man at its centre. Scientific thought transformed it into an incidental speck of dust in a nearly infinite universe, coming about through the action of immutable laws of nature rather than divine caprice. What on earth was orthodox religion to do about this transformation? One important response is referred to as “liberal theology”. This accepted the basic premises of scientific materialism, and interpreted scripture to be of essentially symbolic meaning, offering a deeper understanding of the world. The historical truth of biblical stories was treated with a high degree of scepticism. To this line of reasoning there was a counter-reaction, of whom the most famous figure was the German theologian Karl Barth. He injected modern energy in to traditional ideas of divine will in a sinful world, often referred to as “dialectical theology”, because of its confrontation of paradox.

Quick’s work can be understood as plotting a middle way, by constructing a modern philosophical underpinning to orthodox belief. He accepted the “threefold cord” of scripture, tradition and reason. His aim was not to change orthodoxy, but to present it in a new light which the modern mind, with its emphasis on reasoning, could accept. A central aspect of this was framing theology in terms of classical metaphysics – the first principles of philosophy.

Quick was fascinated by the duality that runs through Christian thought from its origins. He characterised this as being between the “Hellenic” and “Hebraic” traditions. The Hellenic tradition is based on classical Greek thought, and in particular the idea of Logos. This has been translated into Latin Verbum, and English “Word”, which means much the same as the Latin. This has led to some perplexity, such as the mysterious opening of John’s Gospel (originally written in Greek): “In the beginning was the Word”. Logos actually means something much bigger than “word” – it refers to rationality and orderliness. We get some of the meaning the idea from its English derivative “logic”. Greeks believed in a pantheon of divine entities interfering with the human world. But these gods operated within a divine framework, the Logos, that lay beyond. It is an essentially passive idea. Liberal theologians equated God with this Logos, who did not therefore become a personal actor in our world. Christian doctrine was essentially symbolic in their eyes. This may be a long way from most people’s understanding of the religion, but the idea has always been there. It is associated with Christian mystics, such as the Spanish 16th Century St John of the Cross, and the 14th Century Julian of Norwich, after whom Quick named my mother. It is not that the mystics were theological liberals, but they developed a vision of divine revelation and universal divine love that is the beating heart of theological liberalism; they downplayed ideas of divine retribution and sin.

Contrast this mystical, symbolic, aesthetic and revelatory path to the Hebraic tradition. This emphasises divine will over revelation, instrumentalism (that is, concrete action) over symbolism, and ethics over aesthetics. This is, perhaps, a more familiar version of religion. It conjures up pictures of fire and brimstone, and the division of mankind between those that follow the Lord (often referred to as the “Chosen”) and those that don’t. It is the idea of religion that the liberal theologians sought to excise as no longer compatible with modern thought. But Quick could not accept this. Christianity without the Hebraic tradition would not be Christianity. But, unlike Barth, he could not reject, or demote, the Hellenic tradition either. He sought to effect a reconciliation.

The details of this need not concern us, and not just because I, without a classical philosophical training, have been unable to grasp them properly. Ultimately the project failed in the sense that there was no satisfactory reconciliation to be found – which, as Mr Hughes points out, is not to say that the effort was not worthwhile. Often the journey means more than the destination. And Quick leads our thoughts to many interesting places. His struggles help us to understand what Christianity is about, beyond the perpetuation of ancient traditions.

The bigger problem with Quick’s work, though, is not his failure to resolve the tension between Hellenic and Hebraic thought, but the way that, in the later half of the 20th Century, idealistic, classical metaphysics has fallen out of fashion. We set our sights lower these days. We feel that a single Truth is unattainable, and we are content to examine rival versions in an unresolved pluralism – we make our own choices but without the expectation that the rest of the world must follow.

Reading about Quick throws light on my own faith, or lack of it. After an Anglo-Catholic Church upbringing, and extensive engagement with Evangelical traditions at university, I came to reject anything that looks like Quick’s “Hebraic” tradition. But without it, what do you have? Scientific materialists believe in the Logos, but that leaves them a long way away from anything like a religious faith. You can layer on top the poetry of love from such mystics as Simone Weil, Quick’s contemporary, or the philosophical exploration of the I-Thou relationship from Martin Buber, another contemporary of Quick’s, of the Jewish faith. That gives you depth. But it was Barth’s highly Hebraic vision that challenged Hitler, and somehow moved things into the concrete world of action and counter action from that of mystic contemplation. I cannot resolve that tension in my soul, so I call myself an agnostic. Quick’s philosophical apparatus may be dated, but the challenge he confronted is at the heart of any attempt to reconcile a modern understanding of the world with religious faith.