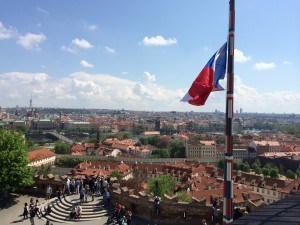 From Dresden, we went by train to Prague. After Germany, it was a bit of a shock. Within minutes of arrival we had been ripped of by both the forex desk and the taxi drivers. We were driven through some seedy looking streets to a rather seedy-looking apartment. After a week of Germany, it felt that we had been dropped straight into the Third World.

Some of this was just lack of acclimatisation. The apartments soon looked characterful rather than seedy, being in a genuinely old building. And it had functional wifi, unlike both of our otherwise highly functional German apartments. Prague is not remotely German. The streets are untidy, but they were also bursting with life. It seemed like you could buy anything. Sex shops were common, and the food shops seemed to devote most of their space to booze.

Tourists were everywhere. The locals did not even attempt to speak Czech – and I’m afraid I didn’t either, not even a thank you in the local language, which I usually manage. Visitors crowded around the various outstanding tourist favourites: Charles Bridge, the Castle, and the Old Town Square. Beyond these they seemed more interested in eating, drinking, shopping and having fun, rather than taking in their astonishing surroundings.

Prague’s buildings escaped serious damage in the war, unlike Germany’s (or Poland’s, Hungary’s or Russia’s, to name a few). The Communists did not have the resources to do mass redevelopment. The result is that the city is left with a huge variety of old buildings. These cover a very wide range of dates. There are the medieval gates, and the 16th, 17th and 18th century churches and palaces. But also there are a lot of 19th century buildings, including many Art Nouveau ones from the late 19th and early 20th century. The sheer extent of these old buildings is breathtaking. Before the war, Prague was one of many beautiful old European cities. Now it gives you an idea of how much has been lost in that orgy of destruction.

Unlike the buildings, the people were not so lucky. The Nazi occupation was brutal, especially after the assassination of Reinhard Heydrich in the city in 1942. 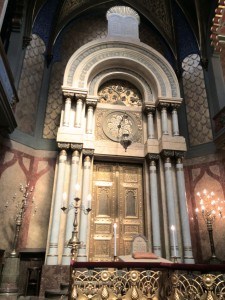 The previously flourishing Jewish community was mostly murdered or driven out. Quite by accident we found the Jerusalem Synagogue. We could not resist going in, where we found a display on the history of the Jewish community after the war. We need to remember that the persecution of Jews, up to and including further murders, did not end with the war. This was especially if they tried to reclaim their property. The idea that one of history’s great wrongs had been done to the Jewish people was slow to develop. The Communists continued to discriminate against Jews right up to the liberation. It may be that without the central focus provided by the Zionists and Israel the Holocaust would have been lost amid the many other appalling acts of the 20th Century. Though we gentile Europeans draw a rather different lesson from that crime than do the Zionists, they were right to raise our consciousness of it, and it has shaped the way we view ourselves and the world profoundly.

So Prague is a treasure trove of old buildings and artefacts from a lost age. But, like so many other European cities, it also reminds us of our chequered past. It deserves to be one of the most visited cities in the world. Perhaps it’s a shame that so many of them are more interested in shopping, sex and booze than in history – but maybe their money helps keep the memories alive.