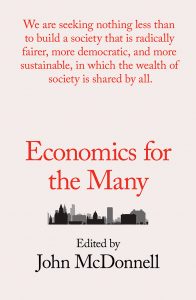 In my last post I referred to a new book, Economics for the Many, a collection of essays edited by Labour’s Shadow Chancellor John McDonnell. I am very interested in any new thinking coming from the left because I spy the possibility of a coalition between liberals and socialists – whether inside Labour or between Labour and another party or parties – since the right  seem to have run out of ideas and started allying themselves with toxic nostalgists. So I bought the book. My first idea was to read it all and produce a single review article. No doubt I would have come up with something along the lines of this rather dismissive review by the FT’s Chris Giles. But the interest is likely to come from some of the details rather than the general thrust, so my plan is write a series of articles as I read it, a few chapters at a time. This is the first.

In my last post I was somewhat dismissive of Mr McDonnell as a Leninist more interested in candyfloss policies than promoting serious policy debate. Be that as it may, Mr McDonnell is keen to portray a picture of a ferment of new thinking on the left, which will produce a radical new orthodoxy, much as Margaret Thatcher ushered in 40 years ago. This collection of essays is part of the evidence, and his introduction sets out an overview..

As such it doesn’t tell us very much. Some of the familiar left wing narrative pops up. Those two abstract nouns, neoliberalism and austerity, play star roles as the villains. The first as a process of alienation of economic management from human values, the second being ideologically motivated cuts that have left tragic consequences. These let to the “social murder” of Grenfell Tower, for example.

But is it candyfloss? Is it designed to give the impression of intellectual movement just to provide cover for a power grab? I have two concerns. Are they coherent? And in particular, do they point to a radical decentralisation of power, or in fact the a Chinese style centralisation, guided by a political commissariat? And secondly, are they actually workable? Do they form a credible basis for reforms in our economic management?

This isn’t a promising start. The basic thesis is sound enough. There is widespread ignorance about economics, and bafflement at the way it is talked about. I think it is a bit worse than Antonia Jennings, a member of the political think tank/charity ecosystem, suggests. Many of that minority who think they have a strong grasp of the subject actually don’t. This allows politicians to build up myths not based on sound economics. The austerity policies of the 2010 government is, of course, used as the primary example. The Brexit campaign of 2016 is used as another.

Her solutions, though, don’t measure up to the task. She suggests a number of nice ideas: improve education at schools and universities, bring more women into the profession, change the way economics is presented. But these feel hopelessly inadequate.

The first problem is that economics rests on a number of insights that are profoundly counter-intuitive. One is that an economy as a whole has to be managed quite differently from a household budget – the idea of living within your means works out in a very different way. Another is the idea of comparative advantage – which means that trade should benefit everybody. Alas these ideas are not only counter-intuitive, they have layers of understanding, which even trained economists argue over. Many, for example, have not got beyond the basic idea of “trade is good” to understand how a changing world might affect the benefits of trade. This will take much more than a bit extra schooling and more user-friendly language to fix, surely?

The second is the sheer political imperative to frame an easily digestible narrative. Austerity illustrates this. There is a perfectly economically literate case to be made for this policy – many economically literate politicians and civil servants, amongst others, supported it. The government did not attempt to make that case in public because the level of political debate did not permit it. The counter-narrative from the left that austerity was unnecessary and therefore an ideological attack on public servants and poor people is just as illiterate, and framed from the same political necessity. In fact there is a very challenging debate to be had on the subject with well-made arguments on both sides. What is rather depressing about the whole episode is that so few people are or were interested in having that argument out. It is too politically important for that.

Political polarisation is no doubt a strong factor here. It is much more effective to shout down and demonise your opponent than start a reasoned debate. Labour is part of the problem, or, more generously, a victim. What is the answer? I am tempted to say that it is greater political pluralism based on electoral reform – though that has brought its own problems elsewhere in the world.

So yes to reforming the economics discipline. But expectations on the political impact of this need to be moderated. The problem is more deep-seated.

In fact I suspect this chapter is more about maintaining that sense of outrage at neoliberalism and austerity, with the suggestion that both are founded on economic ignorance. A rather bitter piece of candyfloss.

Simon Wren-Lewis is an academic macroeconomist, who has advised the Labour leadership on its economic policies. He writes lucidly and is perhaps an example of what Ms Jennings is looking for in clearer economic discourse. His topic is the Fiscal Credibility Rule (FCR), an operating principle for tax and spending policy that was adopted by the Labour leadership before the 2017 general election to show that it could be trusted with the government finances.

He starts with an elegant description of macroeconomic policy before the crash. He then moves into criticism of the 2010 coalition government’s austerity policy, which he says strangled economic growth. This story is central to Labour’s narrative, and you cannot expect a balanced discussion of this in a book like this, published on the party’s behalf. Mr Wren-Lewis, anyway, has taken sides, in an example of something that Ms Jennings might have commented on but didn’t: academic economists take sides in policy debates rather than trying to tease out the disputed issues and resolve them. I’m not sure how much this tendency is due to the politically charged nature of the discipline, and how much this goes on generally in academia. It is tempting to rise to the challenge, but this is the wrong place to do it. His is a perfectly respectable academic argument that I happen to disagree with. But it matters more in understanding the past than in working out what to do in the future.

The feature of the FCR that Mr Wren-Lewis thinks is most innovative is the idea that when interest rates are near zero, the government should use fiscal policy to help restore aggregate demand back to the point when interest rates start to rise again. The article then takes a rather puzzling turn. He talks about Modern Monetary Theory (MMT – SW-L shows a real weakness for TLAs). This is an idea that has growing currency on the left, which suggests that the regulation of demand should principally carried out by fiscal policy, and not the manipulation of interest rates by a central bank. If that is the case then the FCR is a bit of a miserable compromise. He leaves it unclear as what he really thinks.

Another interesting point is thrown in as an aside: Labour’s fiscal rule does not include borrowing for investment. This would be a radical departure for the British Treasury, who like to manage government borrowing as a whole, whether it is driven by investment or not. Many academic economists, such as Joe Stiglitz, a Nobel Laureate often quoted by writers on the left, think that this is critical. If you read their critique of the 2010 coalition government closely, you will see that they don’t particularly criticise the aspects of austerity that made Labour supporters most angry – benefit cuts and reductions to the government payroll – but focus on the slashing of investment. An interesting debate is glossed over here: if fiscal policy is to be the main instrument for managing the business cycle, what balance should be taken by capital spending, and what by revenue deficits? I can see arguments on both sides, but it isn’t talked about enough.

For what it is worth, I agree with the central premise of MMT (which Mr Wren-Lewis points out is old-fashioned Keynesianism) – which is that fiscal policy should take up a full role in managing the business cycle, relegating central banks to support. But that invites a whole series of difficult questions, of which the role of capital spending is just one. A more important one is how do you tell when the economy is overheating, and so fiscal policy should be tightened? Mr Wren-Lewis simply suggests inflation – but in the modern economy inflation is no longer a reliable signal: dangerous imbalances in the financial system can build up instead. And there is an even bigger question: MMT in its simplest form implies a massive concentration of political power at the centre. For Leninists that is a good thing; liberals worry that this simply leads to incompetence and corruption.

But Labour aren’t going there yet. The FCR is actually rather a modest proposal, and sensible enough as far as it goes. But there is a much bigger debate to be had about how to manage the macroeconomy.

So a rather disappointing start, but many of the more interesting chapters were always going to be later on.

5 thoughts on “Economics for the Many: Labour’s challenge to the orthodoxy part 1”