Scottish politics is an exercise in asymmetric warfare. The Scottish 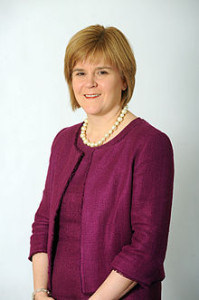 National Party (SNP) are steeped in the nation’s own political culture, and focus on their objective of obtaining its independence. The unionist parties are more concerned with the politics of UK as a whole, and push their policies concerning Scotland and the Union into the “too difficult” pile until too late. This has been stark in the last few years. The SNP won their referendum on independence (i.e. holding the referendum, rather than the outcome, which they lost). At first Westminster politicians did not take the campaign seriously, relying on comforting opinion polls. Then, as the No campaign went awry and they woke up to the implications, they panicked. The main party leaders made an ill-thought through pledge (referred to as “The Vow”) on devolving more powers. When the referendum was over, the main party leaders could only see the issue in terms of their own struggles for supremacy in Westminster. The Conservative sought to embarrass Labour with a call for “English votes for English laws”. Labour called for a Constitutional Convention to head this off, but offered no vision of how the thought the union should be run. The SNP are now about to make both parties pay dearly for their negligence.

The SNP lost their referendum, but far from being depressed and demoralised, they have treated the affair as a sort of reconnaissance in force preliminary to a longer campaign. They have made a sharp change in strategy. First their long-standing leader, and Scottish First Minister, Alec Salmond  stepped down, to be replaced by his very capable and popular deputy Nicola Sturgeon. Then Mr Salmond said that he would stand for the Westminster parliament in the May election, meaning that Westminster would have one of the party’s biggest hitters. Then yesterday Ms Sturgeon dropped a bombshell. She said that the SNP at Westminster would happily vote on the English NHS. Until now the SNP at Westminster have stayed clear on voting on matters, like the NHS, which have been devolved to the Scottish parliament. The reason offered is that Scotland’s funding formula (“the Barnett formula”) means that their funding might be affected by England’s health policies. There is practically no aspect of devolved policy that this argument could not be applied to. The SNP are now offering themselves as a fully fledged coalition partner to the Labour Party, should the latter fail to win an outright majority. The three main Westminster Parties hadn’t seen this coming, and they are in utter disarray.

For Labour this is unmitigated disaster. The SNP’s sudden interest in Westminster politics makes a large number of their MPs in Scottish seats vulnerable. The current polling is awful; the party could lose 30 seats. Labour has taken Scots voters for granted ever since the Conservatives’ Scottish presence collapsed under Mrs Thatcher. Their ineptitude was on full display during the No campaign. They have no idea how to construct a persuasive, coherent message and stick to it: their preferred method is just crude menace.  Their campaign message so far is to threaten Scots voters with another Tory-led government. “Don’t worry,” say the SNP “if you vote for us instead we can stop the Tories too.” Labour are left with just emptiness in return. They have no vision of Scotland’s place in the union beyond panicky responses to nationalist pressure.

Intelligent Tories (there are some) should be troubled too. The purpose behind the “English votes for English laws” idea was simply to embarrass Labour in England by pointing out how much they depended on blocks of Scots and Welsh MPs. There is no coherent, workable model of a well-functioning UK constitution behind it. But it carries the risk of destabilising the Union by stoking up English resentment without offering an answer. The SNP have just made that much worse. What about the fate of England’s NHS being dictated by SNP MPs? Conservatives (mainly) support the Union. Scottish independence would be seen as national humiliation and a bitter blow. And yet they are playing into the nationalists’ hands.

Things aren’t much better for the Liberal Democrats. Their main problem is political weakness, resulting from a backlash for going into coalition with the Conservatives. This is at least as strong in Scotland as it is elsewhere in the UK. The party has thought through its vision of the UK constitution more than the other parties, and its solutions are much more robust. But its softly-softly approach to devolution within England, and rejection of the idea of an English Parliament and government, look constructed for a gentler pace of politics than is in prospect if the SNP do well. Still there are some silver linings to the very dark clouds. Labour are retreating from seats they were hoping to take from the Lib Dems, in order to face off the SNP in their own backyard. And Christine Jardine, their feisty candidate in Gordon, the seat Mr Salmond hopes to win, will be no pushover, as she rallies the anti-SNP vote.

But each of the main unionist parties need to take a step back, and form coherent ideas on how the constitution of the Union should look. It isn’t enough to call for a Constitutional Convention; each party must spell out a clear vision that looks sustainable in the face of mischief-making by the SNP. Even if such ideas have short-term political costs. The people of this United Kingdom deserve no less.