Over a month ago now I, and four other 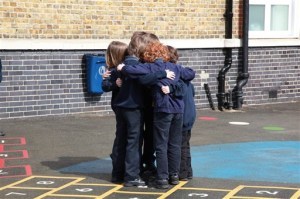 governors at Telferscot Primary School in Balham, were interviewed by the Ofsted inspector. As Chair I managed to show a good grip of our performance statistics and the general overview. But all the governors contributed knowledgeable answers . The highlight was when the inspector asked us about the curriculum – the parent governors burst into an enthusiastic description of what the school was doing – showing not just enthusiasm, but knowledge and understanding .

It was an impressive performance. And so went the rest of the inspection. Children, parents, teachers and staff, and above all the Head and management team, each delivered an impressive display. Ofsted’s report rated the school at its top grade, Outstanding, in all categories: leadership and management; behaviour and safety of pupils; quality of teaching; achievement of pupils; and early years provision. The school had always been a good one, but at last we had caught up with the ever-rising bar to be considered Outstanding. This was thoroughly deserved. The school’s journey was very much an individual one – but it still throws light on wider issues of public policy.

Back to the beginning. Ofsted, for the benefit of my non-English readers, is England’s chief regulator and inspector of schools. Its rating system has become the benchmark by which schools, especially state schools, are judged. School managers and staff live in dread of its inspections. Telferscot is a state primary school, covering ages 4-11 (Reception to Year 6), and a pre-school nursery. It is in transition from being single form entry (with a standard class size of 30) to two form, which now goes up to Year 3. A further two forms of entry, and a second school site, are in prospect. This makes it a relatively small school (currently) by London standards, though still above the average for the country as a whole. Its children are from mixed social and ethnic backgrounds, with a solid core of middle class families, but plenty of families in more challenging circumstances. It is a bit of an “average school” in its mix of pupils, and a sort of microcosm of the challenges facing the country’s school system as a whole – which ironically makes it rather unusual – most schools are more homogenous. I have been a governor since 1999, and Chair of Governors since 2007; the previous inspections by Ofsted that I experienced were in 2001 and 2009.

The school’s operations are based on three key areas: a broad curriculum; inclusion; and hard management. These three things are driven by the Head Teacher, Jenny Martin, who took over in 2001 – but the first two, at least, had foundations that go back before that. I would like to say a little about each of these three.

The idea of a broad curriculum contrasts with the alternative of a curriculum that focuses on the basics of literacy and numeracy.  The tension between these ideas shapes much of the debate on education, which, of course, does not stop lots of people trying to advocate both sides at once. The idea of a broad curriculum in turn rests on two ideas. First is that a broad curriculum is required to prepare children for later life; children need much more than basic literacy and numeracy – they need to know how to be socially responsible individuals , how to work with other people  and to enjoy the process of learning itself. The second is that a broad curriculum provides the best context in which the “basics” can be taught. It provides the opportunity to make such learning both more memorable and enjoyable. Children shouldn’t just know how to read; they should enjoy reading and be eager use their literacy to expand their horizons. At Telferscot the broad curriculum is focused on the idea of the “Creative Curriculum” – one that incorporates the arts. This means working with a number of arts groups, including London’s South Bank.

Inclusion means drawing in children from all backgrounds and working to ensure that they all share the same experience of school and know how to be together. One aspect is the multi-ethnic, multi-national and multi-cultural side of the school, which celebrates its diversity. This is wonderful – but pretty routine for London. Much more challenging is bringing along those from difficult social backgrounds, where the children tend to lack support at home, and those with special learning needs or disabilities. The school has, in my memory, made no permanent exclusion of a pupil,  and only one temporary one. Inclusion is about knowing, and working with, the wider family, and about arranging for additional educational resources for those with additional needs. It also involves keeping the school open and active outside school hours, from 8am to 6pm. This aspect of the school’s work is one its most challenging, but clearly motivates school leaders – and it is inspiring.

Broad curriculum and inclusion are lovely, liberal ideas that lots of people will agree are a good thing. But making them happen and delivering excellent results across the whole school is another matter. This requires what I have called hard management. There are no easy rides; all people who work at the school feel accountable and pushed to achieve more. The primary instigator of this is, of course, the Head Teacher, Ms Martin (or rather, Miss Martin, as she is known at the school). The Head has to be both hard on everybody (not least herself), and to provide help and support -as well as fostering a spirit of teamwork and good humour that means that people enjoy working together. There are two important things I want to add about this aspect of running the school.

The first is that the school’s success really took off after it adopted a top-heavy approach to school management, with at first three and then four senior staff completely out of the classroom (not counting the non-teaching side), save for providing temporary cover for class teachers when absent. This gives the school’s management to strength and depth to deal with all the extra things the school must do to sustain a broad curriculum, inclusion and deep accountability. It need hardly be added that these managers need to operate as a real team, so that the Head can feel completely confident of the Deputy holding the fort, and so that each member of the team can feel they are making a real contribution to the school’s progress. Head teachers need to be strong personalities; not all find the transition to being team leaders easy.

The second thing is the use of data. The data here means test results and teacher assessments which show the progress each pupil is making in the core curriculum subjects of reading, writing and mathematics. This starts with publicised results for the “Key Stages” at the end of Years 2 and 6, including the Year 6 SATS tests. But while a lot of public attention is focused on these, school managers need something much more frequent to identify potential problems before it is too late to do something about them. Ofsted increasingly uses such data to understand progress, and the school management almost obsesses with it.

Many liberal minded observers of education worry about this emphasis on data. They worry that it undermines the idea of a broad curriculum and the real needs of children, and that it sucks the living soul out of education. But such criticism neglects two things. The first is that such a focus on data really is the only way of making sure that no child gets left behind, and true inclusion. In a class of 30 it is quite easy for teachers to focus on averages and miss the needs of a small number of quiet but underperforming children. Britain has a bad record on this – of leaving a neglected “tail”. The second thing is that one of the outputs of a broad curriculum should be achievement in the basics. It really does hold the whole process to account. If the data shows weaknesses in literacy or numeracy, then this really isn’t something to be glossed over. Telferscot’s emphasis on creative curriculum has a bias towards literacy, which is easy to integrate with the arts, rather than numeracy. The focus on data exposed this vulnerability and the the development of its maths teaching has been one of the main areas of focus for the school’s management, something that has heavily influenced recruitment, for example.

I could go on. I want to write two more articles. The next will cover the field of school governance – which is the bit where I personally can be said to have made a small contribution to the school’s success, and claim a slither of actual professional expertise. And finally I want to draw out some wider issues for the development of public services.