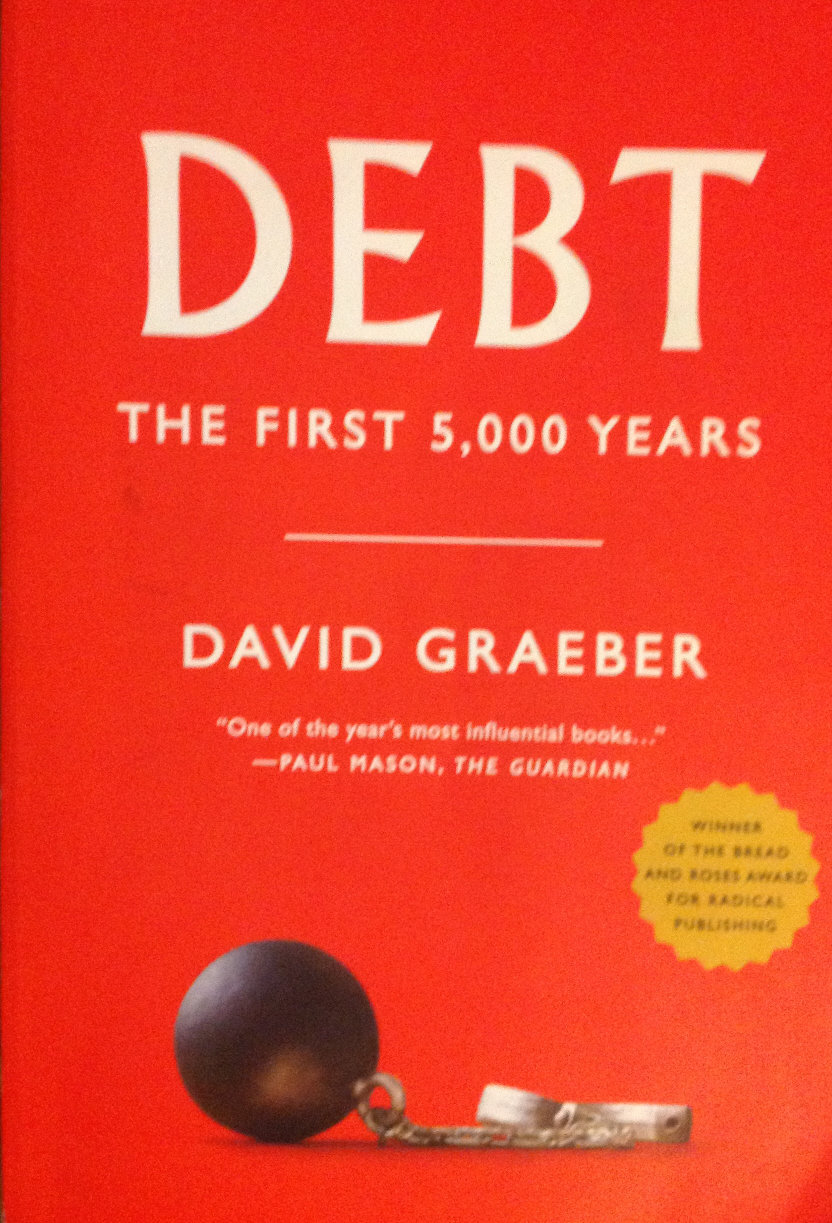 One of the books I received for Christmas was David Graeber’s Debt, the First 5,000 Years. Mr Graeber is an American anthropologist, now working at Goldsmiths in London, who has been active in the anti-capitalist Occupy movement, and describes himself as an anarchist. The book promises to give some intellectual heft to the anti-capitalist case, by examining the origins and history of debt and money, and how we need to rethink it. So far so good. But after the book promised so much at the beginning, I can hardly contain my disappointment with its limp ending.

The book starts well enough. He immediately focuses on modern economics’s weakest point: the theory of debt and money. He may labour the nonsense of the economist’s creation myth of a barter a economy a bit too much: economists aren’t really interested in history after all. But economists’ confusion over the role and meaning of money is evident; personally I wouldn’t use the barter myth to illustrate this, but the way economists still talk about printing preses and helicopter drops when trying to explain monetary policy. Mr Graeber runs his hand across the soft underbelly of economics, but then, instead going in for the kill, he throws away the knife. He rejects the whole, quantitative, mathematical language of economics. He thinks that the discipline’s attempt to preserve moral neutrality is in fact condoning immorality and violence. Like it or not, numbers and mathematics are central to our society’s workings, and rejecting these tools out of hand leaves Mr Graeber’s arguments with very little purchase.

The full, awful implications of this are not immediately clear, however. Mr Graeber puts the question of money and debt into an anthropological context, and this is a good read. I found his categorisation of human interactions into three types very illuminating. These types are exchange, what he calls “communism” and hierarchical. The exchange relationship is the typical arms length commercial one: one item is exchanged for another, typically money, and there are no further implications for the relationship between the parties; it ends with the transaction. A communistic (or perhaps communal would be a less provocative word) transaction is typical of close communities: transactions aren’t exchanges, those who are able give to those who are in need, all a part of a wider, long term relationship. Relationship is also key to hierarchical transactions, but it is one of authority. A lower individual pays tribute to a higher one, while the higher one may cast beneficence to those beneath. Mr Graeber is careful to say that none of these is inherently superior to the others, and any society needs to use all three. But he complains that the modern world puts exchange relationships on a pedestal at the cost of communistic ones, costing the quality of human relationships.

All this leads into a broad historical narrative – the 5,000 years – of the Eurasian continent. Originally money develops as a credit relationship, and is not seen as a thing in itself: its accounting function is the critical element, and it is woven into the fabric of society, based on trust. But then the idea of precious metals, gold and silver in particular, becoming money in its own right rapidly took hold across the entire continent. The effect, in his telling, was malign. Money existed independently of states and relationships. Soldiers could loot money from one place as they destroyed it and spend the proceeds elsewhere. It facilitated both the running of armies and trading of slaves. Sinister, cynical empires came to dominate the world in Europe, India and China in the centuries before and after Christ.

These empires then broke down (or changed nature in China) as precious metal (bullion) money was drained from the system. In Mr Graeber’s telling this has much to do with the new world religions (Christianity, Islam and Buddhism) in what he calls the Middle Ages. His account is admirably even handed in its geography, rather than the customary focus on Europe. In this age Europe is a barbaric offshoot from the civilised worlds of the Middle East and China. Credit becomes central to commerce, which operates independently of the state, and is based on trust. This is something of a golden age to Mr Graeber, though not the European end.

This unravels in the Renaissance, with the Europeans leading the way. Gold and silver is looted in America and then traded with the Chinese. An age of violence and destruction is born, as trust is no longer required in trade and commerce.  Then, in the 17th and 18th centuries the malign instruments of modern finance, bonds and shares, are invented in order to fuel society’s appetite for war. Meanwhile, the slave trade takes off, destroying African society amongst other victims. An age often portrayed by western historians as one of progress, Mr Graeber portrays as one of a descent into destruction. This is deliberately provocative, but he has a point: this is an age of war, colonialism and slavery.

And it is here, as the industrial revolution begins, that Mr Graeber’s account runs out of steam. All the building blocks for capitalist society are in place, and its evil roots clear; he almost says “and the rest is history”. He swiftly moves on to his final chapter, where a new era begins with the collapse of the Bretton Woods system, and with the inevitable collapse of capitalism in its wake. I was expecting to read an account of the era of economic growth, but there’s practically nothing there. And the awful truth dawns. Up to this point I had been giving Mr Graeber the benefit of the doubt, for all his provocations. But the emperor has no clothes. When it comes to describing the modern world he is utterly out of his depth and as a result anything of consequence he has to say (and there are some) seems a matter of random chance. An example is his idea that the purchase of US Treasury securities, which will always be rolled over rather than repaid, is in fact paying tribute to the primary military power. the USA. He spots a problem with this account: the Chinese are amongst the largest buyers, and they are power rivals. He then has to concoct a story that this is part of a long term Chinese game. This is really very silly. The Chinese are buying US Treasury stock because they are running a big trade surplus and there is nowhere else for its surplus dollars to go; the power transfer implied is minimal; but the trade surplus is an important element of the Chinese development strategy, which involves building up production in advance of consumption, and in the great scheme of things the dollar surplus isn’t that important to them; it’s only money – if they lost the lot in a crash tomorrow, how much does it really matter? The Chinese seem to have grasped Mr Graeber’s message about money rather better than he has himself. Mr Graeber’s lack of economic literacy has him floundering to comprehend what is happening around him.

His thesis is that modern capitalism is a typical bullion economy based on power and violence, and the absence of trust, with exchange and hierarchical transactions driving all else out. Most people in developed economies are little better than slaves, tied to their employers and struggling to pay off debt. Debt is used to enslave people. But this system is fundamentally unstable and is in the process of collapsing.

But after the emperor-has-no-clothes moment there is no aspect of Mr Graeber’s thesis that doesn’t look questionable. Is is really true to say that capitalist transactions are based on the ultimate sanction of force, and not on trust? Is it not trust that distinguishes advanced capitalism in say, Denmark, from the less developed versions in Russia and China?

And he misses the whole issue of growth. This process, driven mainly by increased productivity, has improved the lives of countless millions – and is genuinely popular with most people in both the developed and developing world. It is by no means evident that today’s workers can be compared to Roman and African slaves. And debt has played a critcal role in lubricating this growth process, by allowing investment: payment now for a later gain. The whole culture of investment is omitted from Mr Graeber’s analysis: debt for him has but one purpose: to enslave the debtor by forcing him to make a promise he cannot keep.

Mr Graeber’s failure is underlined by the absence of any practical ideas about how the world should change to make it better. His only idea is a Jubilee: a systematic forgiveness of debt. But he hasn’t thought about the social chaos that would result as all savings were wiped out. The modern way of doing a Jubilee is called hyperinflation. It is hardly evident that the phenomenon that created Nazism is necessarily helpful to the development of society and the empowerment of the poor.

Is there anything to be retrieved from Mr Graeber’s spectacular collapse when confronted with the modern economy? He happens to be right about an awful lot of things. Money is best regarded as an abstract concept, a social invention without underlying reality. Debt also is a social convention that can outlive its usefulness, and should not be treated as sacred promise. The exchange method should not be idealised as model for all life, as Chicago School economists do. And economic growth in the developed world does seem to have hit natural limits, whose consequences we still don’t understand. Capitalism may indeed collapse if it continues in its current form.

But the answer is not to condemn capitalism as the work of Satan, and hope for something better to turn up. Mr Graeber’s work is pure antithesis. Progress is made by synthesis: by taking capitalism and making it better. And you can’t do that by rejecting the discipline of economics, for all its manifest faults.