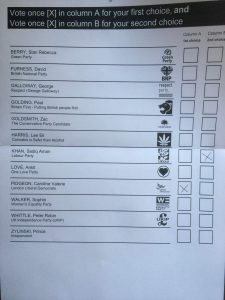 After the Lib Dems shocked the world by going into coalition with the Conservatives in 2010, plenty of commentators threatened the party with oblivion.  At first glance this week’s results in the local and London elections show this prediction to be comfortably on course.  In fact the Lib Dem vote held up well in the party’s strongholds (including in their vilified  leader Nick Clegg’s Sheffield constituency), so extinction is not beckoning.  Some very challenging questions are being posed for the party’s leaders and campaigners, though, especially here in London.

The London results look particularly bad.  Brian Paddick, the mayoral candidate, managed a deposit-losing 4%, and was behind Jenny Jones of the Green party, and only just beat the independent Siobhan Benita, advocating a new runway for Heathrow.  In the Assembly the party mustered a mere 6.8%, leaving it with just two Assembly seats: the peerless Caroline Pidgeon and newcomer Stephen Knight.  These results represent a big fall in the results achieved in 2008, which was already a very bad year for the party.

But it gets worse.  This time the party had the best funded and best organised campaign it had ever put up across the capital.  The results acheived did not match the Greens, who who were barely funded and organised at all, having a much smaller base of activists and donors to draw from.  It wasn’t that the Greens did particularly well – the Lib Dems did very badly.  A repeat performance would mean that the party will lose its London MEP at the Euro elections in 2014.

The London elections are an awkward challenge for the party.  It’s entire campaigning wisdom is based on going after floating voters to win first past the post elections.  This already makes the party vulnerable in proportional representation systems, such as that used for the Assembly.  And yet the attention of the electorate is drawn to the parallel mayoral race (rightly, in view of the office’s powers), which is (near enough) first past the post.  This draws the party in a floating voter campaign for Mayor, that fails either to attract floating voters (because the party is not amongst the front runners) or to rally the core vote, the “base” in political jargon.  The party gave a lot of prominence to tough-sounding slogans like “you break, you fix” to reassure the floaters about the party’s stance on crime, but this left more liberal voters (like me) cold.  The party’s literature consisted of a lot of tabloid newspapers which neither worked as sources of local news to draw people in, nor to rally wavering loyalists.

And the base seems to be disappearing.  Surely metropolitan London is the most liberal part of the country?  And yet the overall results must be amongst the worst in the country.

So the lesson for the party must be to spend more time rallying the base.  It needs to be spell out what the party stands for, liberal values above all, and less defensively justifying the coalition, and not trying to appeal floating voters in areas where the party isn’t strong anyway.  The requires a completely new mindset from the party’s campaigners.  Even when they promise to do this (I remember last time’s Euros particularly well), they tend to get the same old rubbishy tabloids, positioned messages, and so so on.  The next Euros will be an important test.  I’m not holding my breath.

That applies especially to London.  The party still needs to hang on to its MPs and councils, which takes relentless floating voter persuasion – but the party surely can’t afford to disappear into nothingness outside its bastions.  The party needs activists, donors and the moral authority that come with a genuine nationwide base.