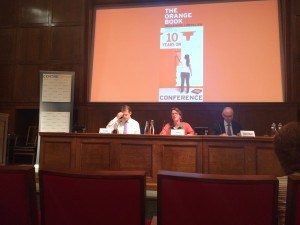 Today I attended a conference organised by CentreForum to mark the tenth anniversary of its publication of The Orange Book. Viewed in hindsight, the Orange Book was an important political event, that did much to set the tone of the following decade. But does its version of liberalism have what it takes to drive political ideas in the next ten years? On today’s form the answer to that question is no.

The Orange Book was edited by David Laws, currently education minister, and briefly in the Coalition cabinet; other contributors were Vince Cable, Chris Huhne, Ed Davey and Nick Clegg – who are or were all members of the Coalition cabinet, along with a number of other people who became ministers – an event that none would have foreseen at the time. While it took on a broad definition of liberalism, it was its espousal of economic liberalism that caught attention. It was not favoured by the Liberal Democrats’ then management, as a General Election beckoned in 2005. But after Nick Clegg took on the party leadership it came to define the party’s official policy line. It can plausibly claim to frame the guiding principles of the Coalition government itself, and not just the Liberal Democrat element. To the book’s supporters this was a victory of a coherent political philosophy over the mushy protest politics and left-wing opportunism that preceded it. To its opponents the Orange Book’s success was the triumph of a “neoliberal” elite over the party’s core values.

The conference consisted of two panel sessions, with three speakers each, in the morning, a keynote speech by David Laws at midday, with a response by economics journalist Anatole Kaletsky, with a final panel session after lunch.

Mr Littlewood led with a lightweight defence of economic liberalism: a formula of smaller government and lower taxes, which, he claimed would lead to stronger economic growth, whose benefits he did not bother to spell out. He felt that the country’s governing philosophy was still social democracy, and that economic liberalism had not been given a true opportunity to show what it could do.

Mr Montgomerie was much more interesting. He pointed out that economic liberals needed to confront two issues which threatened to undermine their system. The first was “social capital”, the family and community structures and the value system without which a liberal economy could not flourish. The second was inequality, of which the most important aspect was the division between those who owned their own houses and those that didn’t. His take on both, and especially the first, had a conservative slant – but the challenge was good. He made the excellent point that the best way of reducing the size of government was reducing demand for it, through a stronger society. This is a point that few in the political elite grasp: the objective of most public services is to reduce demand for them – one reason that they have less to learn from the private sector than may think.

I found Ms Pryce rather less memorable. She made a call for stronger leadership and coherence in government. Our current system was too subject the a “do something” culture, responding to whatever the Daily Mail happened to be beefing about, with individual ministers acting without reference to each other.

The second panel session was meant to focus on public services. It consisted of Paul Marshall, who founded CentreForum and effectively funded the Orange Book; Greg Clark MP, a Conservative minister in the Cabinet Office; and Norman Lamb MP, the Lib Dem Health minister. They never really got to grips with the issue public services, confining themselves to generalities.

Mr Marshall is a hedge fund manager, who also founded ARK, a chain that runs Academy schools. He showed himself to be an economic liberal extremist, which he claimed was necessary for social liberal ends. He promoted the myth (as did Mr Clark) that it was the government’s policy of supporting independent academies that had caused a substantial advance in school standards, especially in London. This is a rather annoying rewrite of history: credit for London schools lies mainly lies is forcing proper accountability on local authorities and established schools, as well a degree of state assistance and support. For Mr Marshall education pointed the way for other services, such as health – that advances could be made through using a diversity of providers. He was right, however, in his passionate denunciation of the complacency within the educational establishment.

Mr Clark proved an interesting speaker. His big idea was decentralisation from Whitehall, on which he claimed a lot of progress had been made with the City Deals that he had worked on with Mr Clegg. Unlike some, he clearly understood the implications of this: that it meant breaking away from the idea that everything had to be done the same way across the country. He did not refer to the Coalition Communities’ Secretary, Eric Pickles, who recently decided to regulate the way in which local governments managed their parking enforcement.

Mr Lamb broadly agreed with this, but seemed a bit wearied by the political difficulties of executing reforms. He felt that our highly centralised government was the wrong way of going about public policy, as the many failures of the NHS had demonstrated.

Mr Laws offered a rather complacent speech, celebrating the success of the Orange Book, while barely acknowledging the challenges to it, such as rising inequality. Mr Kaletsky’s was much more interesting. He understood that the world had changed and that conventional liberal economics was not up to the task. Fiscal policy had to be restored as a policy instrument alongside monetary policy; inequality was not just a matter of social justice but economic efficiency; government would have to both to take up less expenditure and extend its regulatory reach; public pensions and the health service would have to be curbed. While I find this analysis is flawed, it at least challenged the complacency.

In the afternoon the final session had James Cameron, Chairman of Climate Change Capital, Maajid Nawaz, co-founder of Quilliam, and Jeremy Browne MP, a former Lib Dem minister, notorious for his robust economic liberal views. This session raised the issue of sticking to liberal values in an international context. Mr Nawaz said that liberals had to emphasise the global nature of liberal values, and not soften them for cross-cultural sensitivities. Liberals should appeal to individual members of ethnic minority groups, and not approach them via their paternalistic community leaders. Mr Browne put to much emphasis on global competition for my taste – but he did make the point that the Lib Dems were potentially missing an appeal to a younger generation who were both economically and socially liberal. While all speakers emphasised that challenges were increasingly international, and the cross-cultural nature of liberal values, none made the obvious progression that liberals should organise themselves internationally, rather than being stuck on national lines.

Overall impressions? To me this conference showed that the Orange Bookers are nearly out of road in the Liberal Democrats. All the most challenging speakers came from outside the party. The world, and Britain in particular, faces major challenges. The rich are taking too big a slice of the economy, which is slowly throttling overall growth. Everybody else is finding life increasingly precarious. Meanwhile the demographic challenge is threatening to overwhelm what taxpayer funded services can provide and climate catastrophe beckons. These developments are not the result of too large a government and an excess of social democratic policies. They result, at least in part, from the application economic liberalism. The Lib Dems will either sink back into the mushy world of protest politics that it inhabited in 2005, or develop challenging new ideas to confront the problems of now. The Orange Bookers seem to be doing neither, and are in danger of irrelevance.

3 thoughts on “The Orange Book 10 years on: is this the way to reclaim liberalism?”