Last Saturday I joined the March for Europe in London 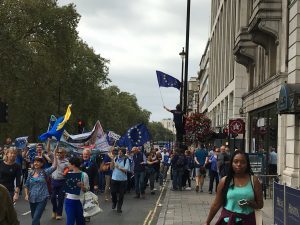 . These are the hard core of people who voted Remain in June’s EU referendum. By my estimate between 10 and 20 thousand marched from Hyde Park to Parliament Square, with Liberal Democrats prominent among them. The anger of these marchers was evident. Where to go next politically was not.

It is worth considering what the feelings of the protesters is, as media types and professional politicians attempt to move on. These people feel that a part of their birthright has been taken away – that the result is an assault on their very identity. They were not pro-EU because, as the Remain campaign emphasised, they thought they would be a bit better off economically. They feel part of a bigger Europe. And if there is one single thing they feel most acutely about, it is freedom of movement, because those rights to move and work around the Union are the most tangible and beneficial to them. Some were citizens of other EU countries who have settled here, having felt secure in rights to do so. Many more were British but want the right to move around the rest of Europe – or more strongly, they want that right for their children. It was an Australian, with a British daughter, that made that point most forcibly to us; Ozzies are acutely aware of the difference that an EU passport makes in freedom to move around, and they prize that freedom.

This is significant because British politicians have rightly identified that the issue that bothers Brexit voters the most is precisely freedom of movement – or fear of immigration from other EU members, especially the less developed countries or the less skilled workers. Many are searching for a compromise whereby much of the single market is preserved, but freedom of movement is restricted. This would cut no ice with most of the protestors, though the umbrella Remain organisation, Stronger IN, has hinted at compromise, while renaming itself Open Britain.

It is easy to understand the politics of the compromisers. The Brexit majority was small, and within that 52% there was a clear divide, between those who reject globalisation and want to adopt protectionist policies (echoing Japan perhaps), and those who chafed at the EU’s slow engagement with the rest of the world, and want Britain to embrace free trade (echoing Singapore). If you detach the latter group, and attach it to the Remain 48, you might get a majority behind a “Swiss” solution, with one foot in the EU, but nevertheless outside. Except it would not be like Switzerland, because the UK would need to be able to restrict immigration from EU countries, perhaps severely.

This would not satisfy the hard core Remainers. So what do they want? They want to stay in the EU, and to ignore or reverse the referendum result. A number of arguments are made. The Referendum was merely advisory: parliament can take a different view. Only 38% voted to leave the EU (even if 36% voted to stay) and therefore isn’t a strong enough mandate for such a drastic change. The Leave campaign was deliberately misleading. They might give credence to reports of buyer’s remorse immediately after the result. Alas these arguments carry little weight in the current political landscape. Most (estimated at 421) English and Welsh MPs will have found that their constituencies voted Leave. Under a first past the post constituency vote there would be a majority to leave of  getting on for 220. That strengthens the mandate. The aftermath of the vote has turned to anticlimax, allowing Brexiteers to say that the economic costs of the vote were highly exaggerated by Remain supporters, neutralising the “lies” argument somewhat. There is little hard evidence to show that buyer’s remorse adds up to anything substantial. There is no basis to call a repeat referendum.

And what would a second referendum be about? A popular proposal is to have one on whatever new deal for exit is eventually struck. The trouble is that we will only know what that is long after Article 50 of the EU treaties has been invoked, by which time the situation will be nearly irretrievable. The UK would in effect have to re-enter the EU: but on what terms? The danger is that we have yet another referendum whereby a loss by the government will create uncertainty and chaos.

Still, the political situation may change. A backlash by Brexit supporters against the claims made by leave campaigners would start to build the case for a reversal. The trouble is that even if they wake up in time, they are likely to blame the Remain politicians anyway. This is clearly the narrative that Brexit politicians are now trying to build. The government should have prepared the ground for Brexit better, they say. The politics of anger and resentment is like that. Admitting you are wrong is as hard for voters as it is for politicians.

So do we hardcore Remains give up and shout abuse from the sidelines? Not yet. The government’s majority is small; it will find it hard to form a consensus around a new vision for Britain. A constitutional deadlock could yet unfold. In that situation things could change.

That is a small hope at the moment. Otherwise we must await a generational shift of voters’ attitudes. Brexit is almost bound to disappoint a large number of its supporters, if only because they want so many different and incompatible things . Younger people are more international and open in their outlook; their views will increasingly become mainstream. Re-entry to the EU, or perhaps a reformed successor is still something to hope for. But this time the case needs to be made on identity and emotion, and not by pretending that such things don’t count.

10 thoughts on “Where do Remainers go from here?”