We ended the Liberal Democrat conference today on a high note. Ni 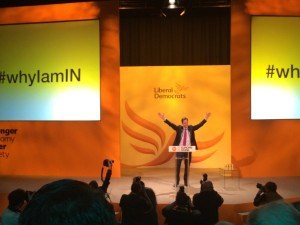 ck Clegg gave one of his best conference speeches, in confident form. We are now learning what this “centre ground” strategy means in practice. Mr Clegg did not utter the dread words in his speech at all. Instead he talked freely about Britishness and liberal, inclusive values. He painted an optimistic, happy picture, to contrast with the sour, pessimistic one that dominates so much of politics now. This went down predictably well with the faithful, but it is a sensible strategy in the wider political debate too. It answers the question “What is the point of the Liberal Democrats”.

The centre ground bit came in the policy programme. In yesterday’s immigration debate, the party talked inclusive, but toned down official policy – for example dropping the idea of a path to legality for illegal immigrants. On the constitution we talked about the Single Transferable Vote, and job shares for MPs. Sweeping reform, including top-down devolution to the English regions, was dropped. The party no doubt still believes in the bigger ideas, but it realises they have to be achieved in small steps. We don’t call it centrist – we call it small steps to more liberal future. But centrist is what it actually is.

So the party’s rhetoric is firmly liberal and optimistic. It helps that Ukip has come on the scene to help define what the party is not. The idea that the real political battle in Britain (well, England) is between the liberal, optimistic Lib Dems and the fearful, pessimistic Ukip is, of course, fanciful – though not on the critical issue of Britain’s place in the wider world. But it helps give the party definition. The majority of Britons may not be liberals, but neither do they feel threatened by them; they are a good second choice. And since democratic politics is largely about compromise and coalition, second choice often comes out on top.

It is a long, long road to return to electoral success for the party. In May in reality it more a question of trying to stave off disaster. The party’s previous tendency to protest, and being all things to all people has lost it a lot of credibility, especially amongst working class voters. The media remains dominated by Labour and Conservative allies. But it is a start, and party activists left york in good heart.