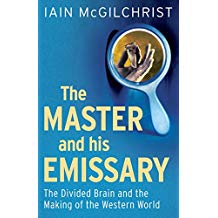 I have at long last finished Iain McGilchrist’s The Master and his Emissary. It studies how the right and left sides of our brains differ, and develops the idea that there is a conflict between the two hemispheres that has wider implications in our society. It is a fascinating book that has changed the way I look at the world.

The first part of the book describes how the two brain hemispheres work. It is a brain structure that has evolved in vertebrates, with the left side being task-oriented and the right being aware of the environment. This simple idea is explored thoroughly by Mr Gilchrist, and he notices that in the modern world there is a bias towards the left hemisphere’s way. It likes rules and calculation, while the right takes on emotions and context. Revealingly, early brain scientists described the right hemisphere as weak and useless. Our society loves the order that laws bring, and likes to pretend that nature operates under an analogous system to the human legal system – we are simply in the process of discovering its laws. The second part of the book takes this much further by trying to interpret the development of Western thought and art in terms of a conflict between the hemispheres. Classical Greece achieved a happy balance, before the left side took over following Plato. The theocracy of the Middle Ages was also very left hemisphere, before the Renaissance brought in right hemisphere thinking. The left hemisphere fought back with the Enlightenment, leading to a reaction with right hemisphere Romanticism until finally the left hemisphere triumphed with scientific materialism. This is very thought-provoking. But I did find some aspects of his argument lacking.

First is Mr Gilchrist’s focus on the West. Other cultures are generally assumed to be much better balanced, with a small excursion into Japanese culture to substantiate this point. This has an annoying post-colonial aspect to it: the modern narrative that all the world’s ills are down Western greed and exploitation. While this is a corrective to the attitude that saw Western civilisation as the only worthwhile sort on the planet, it still denies non Western peoples and cultures agency. Everything still comes back to the West. One of the things that the BBC series Civilisations did well was to show how we need to see Western civilisation in a wider, more human context. Mr McGilchrist’s analysis would be stronger if he found parallels in his battle of the hemispheres in non-Western cultures, rather simply dropping into lazy West is bad, East is good thinking. In fact I don’t this would have been hard to do. Perhaps the two most spectacular examples of left-brained extremism in modern times were Mao’s Cultural Revolution and the Khmer Rouge’s Year Zero. While both of these might have had some Western heritage there is surely much more to it than that. And what about the complaints from Asian leaders about Western decadence, which seem to boil down to us being too sentimental and right-brained?

A second issue is more serious. When exploring the evolution of Western thought he focuses mainly on art, and as the story progresses this focus increases, so that by the 20th Century art is pretty much all he analyses in detail. It also seems to be a rather skewed survey of art: I don’t think there is a single reference to Impressionism, the movement that seems to have had more impact than any other in the last two centuries. Actually what I am more interested in is political thought and business practice. He hints at his view that Fascism and Stalinism were left-brained excesses – and yet his survey of art shows that things are never as simple as they appear at first, and I can see many right-brained aspects to Nazism in particular. Indeed if he had tried to take apart and compare Fascism, Nazism, Stalinism and Maoism instead of Surrealism and Post Modernism the second section would have been much more valuable

And it is through thinking about its application to political thought that I developed my biggest grouse with this book. It is too Right Brain Good, Left Brain Bad. The only real virtue he admits for the left-brain is effectiveness, and the only real vice for the right is corresponding ineffectiveness.  But I think there is more light and dark on both sides. What gave me this insight was watching Donald Trump. He is a right brain genius; he rejects rules, values belonging and always thinks in context (which is why he is so often appears hypocritical). It is more complicated than that of course – his lack of empathy is a left-brained characteristic, as his transactional way of doing business. But it got me to understanding that tribalism is a right-brained characteristic. It wasn’t left-brained white intellectuals who used to spit at coloured children. There was something much deeper and visceral going on. And correspondingly it is the left hemisphere that builds bridges between tribes – it literally and metaphorically builds a common language. It was the Enlightenment that brought Jews into mainstream Western society, and Romanticism that led to their rejection until scientific materialism finally triumphed after the Second World War. Interestingly Mr Gilchrist does hint at this in a caption to one of the colour plates, of a 14th Century picture of the Resurrection of the Dead: “Grasp, the left hemisphere’s means of control, is not intrinsically self-serving: it can also reach out to others. Here the life-giving force comes from the left side of Christ’s body.” There is dark and light on each side of the brain, and it is balance that we should be striving for.

But fundamentally Mr Gilchrist is right. We in the developed world are far too seduced by left-brained thought, and value right-brained insights too little. While there is no proper analysis of political thought in the book, one thing is extremely clear: modern liberalism is rampantly left-brained. This is the most searching critique of liberalism that I have read, and it does much to help me understand why it is failing. It does not put enough weight on emotions, on belonging or on context. Mastery of these things is why Mr Trump is so successful, setting up a strong emotional bond with his supporters. Liberal attempts to counter this are intellectual and dry. They sound clever but miss the point. People will not wake up one day and decide that the liberals were right after all. Liberals must put themselves back in touch with people’s values and emotions. They claim they want to give people more control over their lives, but often they do the opposite: they try to make them conform to a set of  politically correct norms.

There is another important insight that I take from this book. Mr McGilchrist is right that too many people think that humans are machines – or use that metaphor to understand humanity. This is very left-brained. The most egregious example of this is the way artificial intelligence is being hyped. If humanity is a machine, the view goes, we will replicate it very soon. And yet we are nowhere close. There is an irony in this: scientific materialists, the arch left-brainers, do not believe that people were designed by a god, but that we evolved; but they act like believers in Intelligent Design. Humans were not designed by anybody, and that is why they are so hard to understand, and still harder to replicate. And then there is a supreme arrogance about the power of data. The world does not reduce to data. Data give you a small fraction of the past, and that is it.

A further reflection is that the duality of the brain is a very good way to think about effective management. You need focus, and you need awareness of the world. The two are incompatible (attempts to achieve awareness in a focused way usually end in disaster – of which the financial crash of 2007-09 is a particularly clear example) – so you have to do both and make them cooperate. Alas far too management thinking worships task-oriented achievement. Excessive focus is perhaps the biggest reasons why human enterprises fail.

This is a flawed book. But its insights are very powerful indeed.

3 thoughts on “The Master and his Emissary: is modern society too left-brained?”