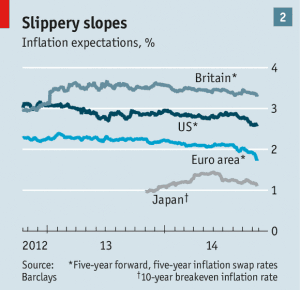 The state of the world economy is worrying economists. GDP growth is lacklustre in the developed world, which in turn poses problems for the developing world. That’s bad enough, but the economist’s nightmare of deflation – prices dropping rather than rising – now beckons around the world. And yet the prescriptions of most economists are shaped by a way of looking at the economy that belongs to the past. A paradigm shift is needed. Debt is at the heart of it, not GDP growth.

For a clear, conventional analysis of the issue read this week’s Economist.  Here’s a brief summary. The developed world economies are suffering from deficient demand. In other words, the economies could easily churn out more goods and services, using existing capital and labour, but don’t because people aren’t asking for the stuff or can’t pay for it. Another way of putting this is that the amount of investment (people spending money on building capital rather than the immediate consumption of goods and services) is less than the amount of saving (the amount by which people’s income exceeds the goods and services they consume). This leads to low growth rates. Now inflation is falling and deflation threatens. Deflation is bad, at least when low demand is its cause, because it makes debts more difficult to repay, and this gunges up the financial system, which makes matters worse.

The conventional answer to this problem, which also goes under the name of “secular stagnation”, is to reduce the prevailing rate of interest. This will encourage people to invest more since the returns to investment, compared to simply sitting on piles of money, would then be higher. But deflation, or low inflation, makes this impossible, because it raises the floor – the lowest real (after inflation) interest rate it is possible to charge. Answer: you raise the level of inflation. The method of doing this is to increase the money supply, since inflation is a monetary phenomenon. All sorts of ingenious ways are then dreamt up of how to do this. But this is all the product of a conventional way of thinking based on aggregate economic statistics, rather than what is really happening in developed societies.

There a number of challenges to make:

We can look beyond these challenges to recognise some issues that might be behind these challenges. Interestingly, these are, for the most part, not particularly controversial amongst modern economists – it is just that they seem unable to accept the implications:

Some of the consequences of these trends are straightforward. Redistribution of income and wealth are now at the heart of political and economic policy, rather something that can be ignored. A much greater proportion of economic investment must be government-led, which imposes a massive challenge for political management. Governments and central banks trying to tweak the inflation rate by a few percentage points is a fool’s errand. Also trying to revive the economy by getting the banks to lend more money to poorer people is unsustainable, even if the lending is collateralised on residential property. The appeal by many economists, such as the FT’s Martin Wolf, that developed country governments should borrow more to invest in infrastructure makes a lot of sense. Using monetary policy to help finance such investment makes sense too. Making sure this investment is directed sensibly is a bigger problem than most allow, though.

And the conventional economists are right to worry. A world of stagnant growth and low to negative inflation creates major problems. In particular many debts, in both private and public sector, will not be repayable. At some point there will be default, since the other options, inflation and growth, are off the table. Or to put it another way, much of the financial wealth that many people currently think is quite secure is anything but, in the longer term. This may a problem for many pension and insurance schemes, as well as wealthy individuals and corporations.

The consequences of this are quite profound. Our society must break its addiction to debt. The banks and the financial sector must shrink. “Leverage” should be a rude word in finance. If low growth is the result, or if a new financial crisis is hastened, then so be it. Let us learn to manage the consequences better. Borrowing to support genuine productive investment (not excluding the building of new houses where they are needed) is to be encouraged, including government borrowing to finance public infrastructure. But other borrowing must be discouraged. Taxation should increased, especially on the wealthy. If that causes a loss of productivity, then so be it – this should be compensated by more efficient financial flows from rich to poor. Political reform must run in parallel to ensure that public investment is conducted efficiently, rather than just disappearing into the pockets of the well-connected.

This is a daunting programme. Stagnating national income and deflation are not inevitable consequences – since these policies do address some of the causes of deficient demand. But we must not think that these statistics are the lodestars of public policy. We need a much more nuanced appreciation of the wellbeing of our planet and the people that live on its surface, and put it at the heart of economics.